You Never Want to Have Sex – Fatherly

A few weeks ago I spoke with Brittany Risher for a Fatherly.com article addressing what the “you never want sex” argument is really about.

The “you never want to have sex” argument comes up often for clients, until it no longer does…

What I mean by that is that when these comments are present in the relationship it means one partner is trying to get the other’s attention. These complaints are meant to let their partner know of their desire to bring about a change in the relationship dynamic.

If these requests to bring a partner’s focus onto correcting the issue or finding some way to soothe their feelings of rejection go unnoticed, then it won’t take long before the issue is no longer brought up at all. If both partner’s stop talking about their issues in the relationship, it may be because there is an assumption made by one of the partners that the other doesn’t care or just isn’t interested in doing something about resolving the situation to everyone’s mutual benefit.

“it is not unusual for apathy and indifference to set in.”

When a couple is resigned to things not getting better or believes the problem will never resolve, it is not unusual for apathy and indifference to set in. This arguably leads to more problems than the initial lack-of-sex problem. If partners get to the point where they have begrudgingly accepted the limitations of a situation, it doesn’t mean they are ok with it. It just no longer feels worth bringing up.

When one partner is feeling neglected or undesired by the other, it is not uncommon for them to be vocal about their feelings of frustration, confusion, and sadness about the situation. Feelings of anger and frustration are secondary emotions, which means we often present with anger as a shield to protect us when we are feeling vulnerable.

Clients often worry that perhaps their partner no longer finds them attractive or desires to be physical with them because maybe they have gained a few pounds in quarantine or have aged since they were first dating. Some clients have real fears that their partner may be more attracted to someone else and then create negative self-talk about their own diminished value. Some clients create all kinds of internal stories about what it means that they are not having sex with their partner.

All of these comparisons and internal stories create frustration and anger caused by ego. The partner who is angry is probably internally feeling unsure what to do with these painful feelings of rejection or believing they are no longer desired. When the person in pain suspects that his or her partner is unconcerned about the pain the situation is causing them, the he or she lashes out with criticism to barb the offending partner as a way to pay retribution or cause pain in return.

“Criticism creates defensiveness, and neither of those communication patterns leads to healthy communication.”

People want to influence their partners to be concerned and responsive about the pain they are experiencing. Unfortunately, many go about it in the absolute wrong way. Criticism creates defensiveness, and neither of those communication patterns leads to healthy communication.

Behind every complaint or criticism there is an unmet need. I try to remind couples I work with that if they can get in touch with the thing they wish would happen and ask for their “positive” need, they are more likely to receive a softer response or offer of compromise from their partner.

Just because partners are in a relationship with each other does not mean they can expect or demand any words or behaviors from each other. Anything one partner does for another is a gift, and the way in which partners ask for their needs allows the other to bestow a gift on them.

Asking for your positive need means noticing how you are feeling when you think about a situation and talking to your partner about the behavior or words that you hear that are causing the unpleasant feeling. Most therapists will encourage their clients to use “I” statements as a way to keep their partner from feeling defensive when touchy subjects are addressed.

Here’s an example of how someone might address their partner without criticism while still asking for their needs in a way that helps diffuse a defensive response from their partner:

SAY: “I feel unattractive and unwanted when I roll over in bed and put my arms around you, and I hear you say, ‘Get off me’ and roll away from me. It would make me feel loved and desired if you could give me a hug, tell me you love me, and if you aren’t in the mood, let me know that you aren’t rejecting me but are feeling stressed about work. It would help me to understand that you aren’t rejecting me and that you recognize that although we haven’t had sex in several months, you still desire me. Is that something you are willing to do?”

The goal of this sort of approach is to let your partner know why it would mean so much if they were willing to take your thoughts and feelings into consideration. It allows you to express why it would be such a gift to the relationship if your partner could acknowledge your needs, even if the answer is no.

While the answer may be no, the door is opened to a deeper conversation about what is going on in the relationship at a core level. This can lead to a softer conversation that maybe you have not been able or willing to deal with prior to the “positive needs” conversation without a pattern of criticism and defensiveness.
One of the things I ask my couples to do as they process the aftermath of the fight is to recognize and talk about their triggers with each other. Triggers generate feelings and create behaviors. Couples are not typically proud of the way they respond to their triggers. Most times, both partners end up wanting to take responsibility for some of the “bad behaviors” they did when they were triggered.

Healthy partners can create a shared vulnerability in which they identify where their triggers come from and what they mean personally. Partners don’t have to take responsibility each other’s triggers or the behavior that is generated by them. But they can work as a couple to figure out how they both want to handle things differently when the issue comes up again.

The reality is that it will come up again, especially if it hasn’t been addressed. The more times it goes by without discussion, the easier it will be to fall in bad patterns of responsive behaviors with each other that can cause long term damage to the relationship.

There may also be some health issues happening for one of the partners that is causing embarrassment or making it difficult to bring up. One partner may be feeling stressed out with some type of life circumstance or mental health issue and be withdrawn from sexual advances or responses. They may be responding with other curious behaviors that could imply they are presenting with symptoms indicative of some deeper emotional issue. If that is the case, it may be worthy of a loving check in. 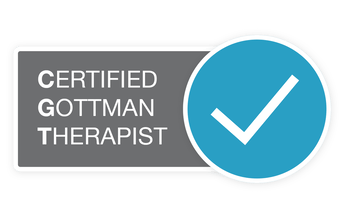 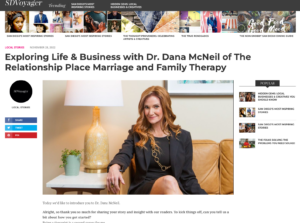 Exploring Life And Business With Dr. Dana McNeil – As Seen In – SD Voyager 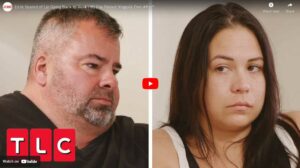 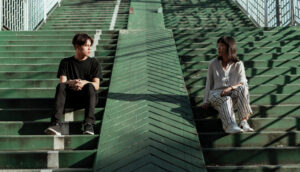 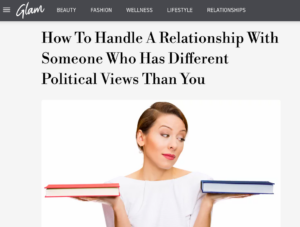